I already introduced you some time ago to Miss Piggy and Kermit, now on to some of the other Muppets that are famous in their own rights. Animal is one of my favorite Muppets, maybe because he is just “cool”. 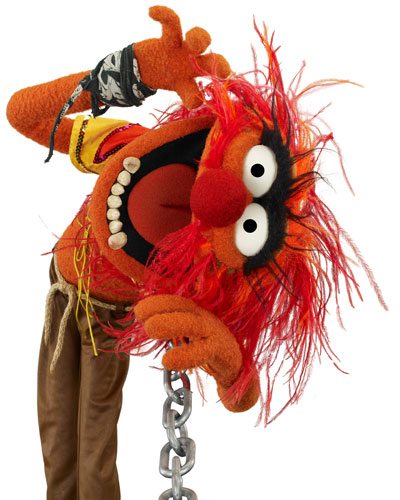 ANIMAL (Animal), the ultimate rock ’n’ roll survivor, finally addresses a troublesome personality trait and finds himself in an anger management program in Disney’s “The Muppets.” He’s traded in his drums for a flute and is struggling to redefine his identity. As if…

But fear not, fans of the over-the-top, monosyllabic, appetite-with-legs drummer from Dr. Teeth’s Electric Mayhem Band. Once reunited with the Muppets, Animal’s incessant (yet innocent) pursuit of rock ’n’ roll, food and women (not necessarily in that order) returns. “Me like,” says Animal (“Muppet Treasure Island,” TV’s “The Muppet Show”). “Movie good.”

WHO’S ANIMAL? Animal is a wild a drummer with a love of all things loud.  A force of nature with a passion for drums, food and women, Animal is the ultimate mayhem-making rock star. He barely speaks (his vocabulary includes just a few shouted words like “Want Woman!” or “Louder”), but he’s still able to express himself loudly and proudly. Animal also likes bunnies, which make him calm, thank goodness!

« My $1 Find : Wordless Wednesday
Filtered Water at Home and On the Go »