Introducing you to a little bit of history each day as we ramp up the excitement for The Muppets in theaters November 23rd. Next up Gonzo another lovable character. 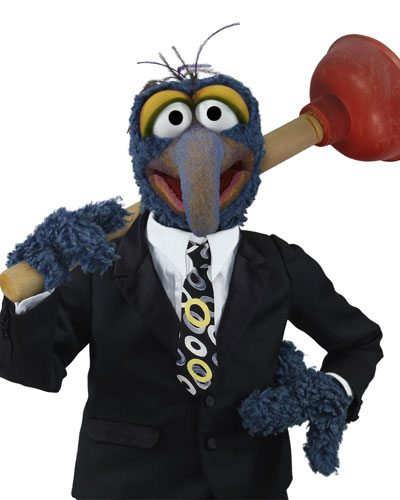 GONZO THE GREAT (The Great Gonzo) has been very busy since the Muppets last performed. In Disney’s “The Muppets,” Kermit, Walter and the gang find that Gonzo’s career is down the drain—literally. “I play a plumbing magnate,” says the daredevil, who returns to the role he singlehandedly made famous. “In this movie we see what happens when I pursue plumbing—my original career choice. Actually, show business and plumbing have a lot in common—especially when it comes to clogs and snakes.”

It takes some convincing—and an increase in health insurance coverage—to get Gonzo back on stage. Fortunately, Gonzo (“The Muppets Take Manhattan,” TV’s “The Muppet Show”), a pioneer of all things weird, can’t resist the temptation of the wild and wacky stunts he performs to earn the eternal admiration (not to mention shock and awe) of his audience—and one very special chicken named Camilla.

Gonzo’s stage act, which includes shooting himself from a cannon, balancing a piano on his nose or eating radial tires to classical music, will likely always end in disaster—but that’s the whole point!

WHO’S GONZO?  Nobody’s really sure WHAT Gonzo is. (We’ve settled on saying he’s a “whatever.”)   He’s an artist who’s out to do whatever has never been done before. He’s serious about being absurd and he’ll  try anything—from bog-snorkeling to a death-defying parachute jump without a parachute (that’s what makes it death-defying). Gonzo knows no fear; he knows no pain. Shoot him from a cannon into a tank filled with sharks, slip live electric eels down his shorts and fill his shoes with lava—he loves it!  He also loves chickens, including the poultry closest to his heart—Camilla.