Home » Blog » My Daughters Kitchen is Possessed
As an Amazon Associate I earn from qualifying purchases.

You read that tile correctly. My daughters little kitchen set is possessed.  The night before last something kept waking me up but I was in such a deep sleep that I would wake up just as the sound was finished so I couldn’t figure out what it was.  However the next night it began before I even feel asleep.  It turned out to my my daughter little kitchen set. 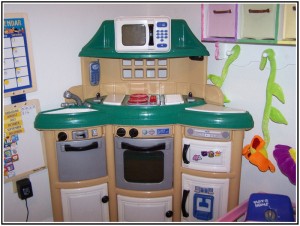 Photo of the Possessed Kitchen Set

The stove area has little knobs that you can turn that sound like either a pot of boiling water with a ding, or the ticking of a timer with a dang.  It appears whatever is possessing it enjoys boiling water. 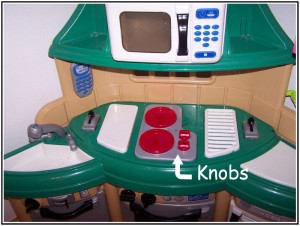 After three times the other night I got up to try to find the battery compartment, not wanting to make too much noise or spend too much time I gave up and shut the door to dim the sound.  Honey was not in her room sleeping she was sleeping with the boys.

So I went in to take a picture of said possessed toy for the purpose of this post.  Then decided I would also include a video so you could hear the offending noise.  As I was switching my camera from photo to video the boiling sound turned itself on.  Since my camera was not ready I waited until it was finished figuring I would turn the knobs so you could hear the sound.  Even though the other night turning the knobs initiated the sound no luck this day.  Yep I turned the knobs over and over again and guess what!? The darn thing would not turn on.

[youtube]5f_oEA1R3cI&hl[/youtube]
This is not the first time this item has been possessed. Over six months ago or more we had the kitchen set out in the middle of the family room because Honey was cutting us a meal.  We left it out there for about a week and each night the sound would repeatedly go off.