Home » Reviews » My Little Muscians
As an Amazon Associate I earn from qualifying purchases.

I’m surprised how much my children are into music, it has never been a hobby of mine in away. Even listening to music is not something I do often. However all three of them enjoy music in some way, shape, or form.  My oldest son just started taking guitar lessons at school and it is now one of his favorite classes. I’m actually excited about it and hope he comes out of it understanding how to read music and play the guitar some and hopefully he can expand on it.

My youngest son has decided to take band in middle school and chose to play the trumpet. I was a little surprised by his choice of instrument thinking the drums or maybe even the saxophone would be more his style. However I learned long ago never to put Nick in any specific category, as soon as I think I know his style he changes on me.

My daughter loves to sing and dance. Not so much publicly but you can hear her belting out tunes and songs from her bedroom. So when I was asked to review the Voice Rockrz Mic I thought WOW this is something Honey would love!

Boy was I right! One of her favorite things to do is put on her head phones and jam to Justin Bieber. Now she can do it with the Voice Rockerz Mic which amplifies her voice. Once in a while we are blessed with her own show, where she has made up routines and we all get to sit and watch her concert. I tried really hard to get Honey to allow me to video her using the Voice Rocker Mic during a concert with her brother but she adamantly refused. The best I could do was get a picture out of her. 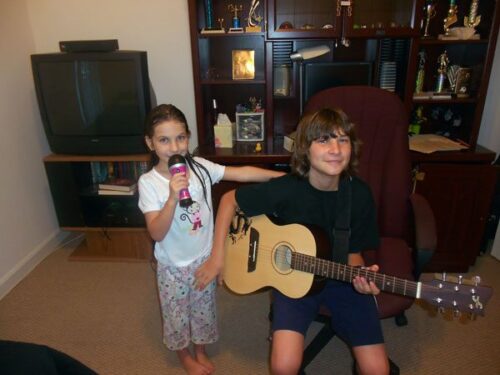 Tap into the magic! Much more than a microphone, the Voice Rockrz™ Mic transforms performances, propelling any show from the living room to the stage. The interactive microphone ‘magically’ changes a child’s voice as they perform with just a tap of the included accessories – a ring and bracelet – to the Mic target zone. Kids can sound like stars and elevate their performances to new heights with the Mic’s incredible voice effects. Tap the ring to the Mic to activate the Hi-Note voice effect; tap the bracelet to the Mic to change up the show with the Echo-Tastic voice effect; or tap the ring and bracelet in succession to uncover the Robot-Riffic voice effect. A rock extravaganza wouldn’t be complete without concert sound effects like audience applause or a crescendo-ing drumroll. Kids can cycle through these sounds with the simple press of the FX button on the Voice Rockrz Mic. By plugging in any MP3 player into the 1/8th” jack (MP3 player not included), they can rock on by singing along to their favorite songs using the magical Voice Rockrz voice effects. Available in pink with flower ring and cute skull bracelet and blue with skull ring and zipper bracelet. Requires three “AAA” batteries, included. For more information, please visit www.voicerockrz.com.

I was really impressed with the quality of this toy. There is nothing that I hate more then when you purchase an item excited about what it has to offer your child and it falls short. This little microphone sounds like the real deal. Even after a couple of weeks it is still going strong and working well. Honey was able to easily figure out how to use it and has no problem playing with it on her own. It is definitely a great item if you have a child that enjoys this type of toy.
Shibley Smiles Review Opinions:

Price: The price of the Voice Rockerz Mic at Amazon is $24.22, we find this price to be average and acceptable. The toy delivers and does a great job of preforming like a real microphone.

Quality: We rate the quality as above average. Many toys we purchase for our children promise a lot and fall short. We believe the Voice Rockerz Mic does what it says it will do, we also love the color.

Recommendation: We highly recommend the Voice Rockerz Mic if you have a child that enjoys singing and preforming and just having a great time. 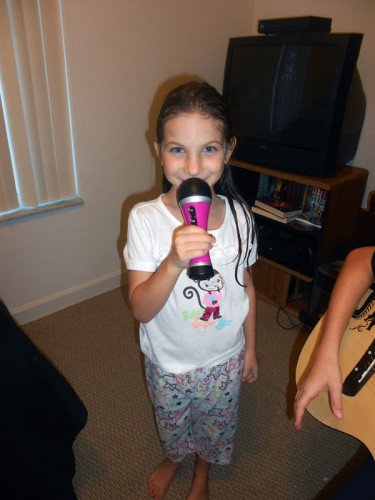 « Make #NutritionPossible and Get Your Fruits and Veggies in from Centrum
Will You Help Me Win an iPad? »