Home » Lifestyle » Entertainment » Olympic Memories with David Boudia : Unlocked on MCR.com
As an Amazon Associate I earn from qualifying purchases.

As an Coca-Cola Olympic Ambassador I’m excited to introduce you to one of the 8-Pack of Athletes David Boudia. David Boudia is an Olympic diver and will be representing USA at the upcoming Olympic Games. He is the latest 8-pack of Athletes to be unlocked at mcr.com. You can stop by and visit David and take a short quiz to get to know him a little better, and enter for a chance to win an Official David Boudia prize pack. However before you do check out my Q&A below, you may find a few similar questions and answers.  I had the honor of interviewing David via email.

Q :How long per day do you train to prepare for the Olympics?

A : I usually train for about 2 hours every morning and then get 75-100 dives in during the afternoon. Depending on the day, I might follow up the afternoon of diving with some Pilates and yoga. Surprisingly, not all of my time training is spent in the pool. About 60 percent of my training is done on dry land.

Q : Did you always have a dream of being in the Olympics as a child?

A : Yes. At age seven, while watching the 1996 Olympic Games in Atlanta, I decided that I wanted to be an Olympian someday. That dream would later be a crucial part helping me to overcome my fear of heights when it came to diving. The 10M platform originally really terrified me, but knowing that my Olympic dream depended on my ability to overcome that fear, pushed me to conquer my anxiety. It has allowed me to realize how much joy diving can bring too.

Q : What drew you to take up diving?

A : As a kid, my parents got tired of watching me flip off of the furniture and enrolled me in gymnastics. A family friend won a diving lesson with then national diving team coach Jon Wingfield, and I ended up taking the lesson. I had already started getting burned out on gymnastics, and the opportunity to continue flipping but in a different sport was appealing. The rest is history.

Q : What is your favorite food? (When you’re not training).

A : I don’t know if I can pinpoint one thing, but there will definitely be some splurging after I finish competing at the 2012 Olympic Games. Most of the time, I eat very health, lots of lean meat, fruits, vegetables, etc.

Q : If you weren’t diving what would you be doing instead? (As in a career)

A : I am not sure what I would be doing if diving wasn’t a part of my life. Now that it has been part of my life, when I retire, I hope to continue motivational speaking and maybe go into sports marketing or Olympic sponsorship after the 2016 Olympic Games.

Q : Who do you feel influenced you the most to become a diver?

A : Notable divers such as Greg Louganis are who have inspired me to strive to become an Olympic-Caliber Diver.

Q : Is there anything you felt you missed out on or had to give up in order to have the time to get to the level of diver you are currently at?

A : Obviously every Olympian makes sacrifices to be where they are, but I feel that God has blessed me with the ability to succeed in the sport that I love, and that more than makes up for anything that I might have missed out on. I have also been lucky enough to have had the opportunity to experience college life and what it’s like to compete as a NCAA student athlete. Some athletes have had to put education on hold for their sport, but I have always enjoyed the best of both worlds.

Q : What experiences or opportunities has diving opened up for you that you don’t think you would have had otherwise?

A : It is such an honor to be able to represent the United States at the Olympic Games and to wear the red, white and blue. If I didn’t have diving in my life, I never would have been able to realize my Olympic dreams. I have also gotten the opportunity to travel the world, partner with big sponsors, like Coca Cola, and experience things that I never would have as a normal kid from Indiana. I also have the awesome opportunity to do some motivational speaking as a result of my success in the sport. It is so cool and personally fulfilling to be able to motivate and encourage others.

Check out David and a few other Olympians share an Olympic Memory:

I Bet You Didn’t Know

Now head on over to mcr.com and take David Boudia’s 8-pack of Athletes quiz and unlock additional opportunities, like this fun wallpaper! 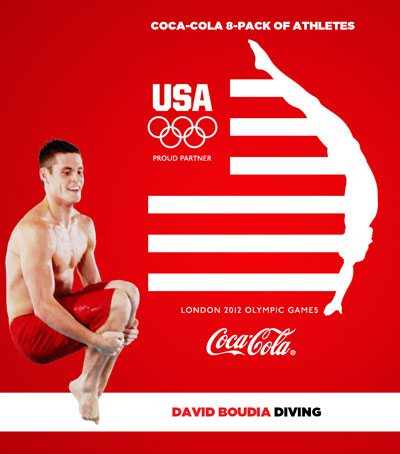 Check back later this week with a little more fun and a great giveaway!

Disclaimer: I was selected to participate in the Cocoa-Cola 8-pack of Athletes promotion. Opinions are my own and NOT influenced by monetary compensation. You may read more of my disclosure here.