Home » Blog » Our Championship Road Update
As an Amazon Associate I earn from qualifying purchases.

I mentioned almost a month ago that we won our championship game. After the game we found out that we would be competing in the county level championship playoffs. I have been posting on Facebook about our progress but thought I would update everyone here.

Our first game was Tuesday 5/28, and we had home field advantage. We ended up losing that game pretty badly. I shrugged it off as nerves (until I realized this was THE team to beat.) Our Wednesday game ended up getting cancelled due to rain (we are having a lot of that in South Florida).

Thursday’s game was one to be remembered. We played on our own field (or we started their). It started to rain but the umps still started the game. During the first inning after we scored 6 runs the game was stopped due to huge puddles on the field. 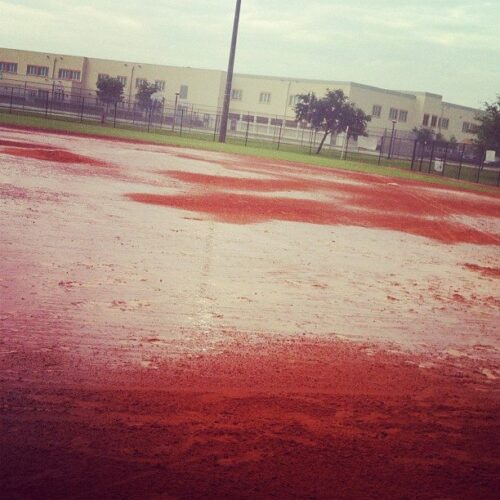 We thought for sure the game was going to be cancelled but instead it was moved to another field. Everyone jumped in the car and headed to the new field as we all checked out our smart phones and saw that the weather was definitely going to follow us. We got to the field and the other team wanted to stat over, however that was ruled out and we started where we left off. We ended up winning by the mercy rule (we were up by 10 runs at the bottom of the 4th) right as the rain began to get a little harder.

Saturday’s game we won and Sunday’s we lost, we played on Monday and game back out on top. So our record was 3-2 at this point. Our last game the make up game from the week before was scheduled for Wednesday but the other team ended up having to forfeit. So this put us at 4-2. We got the final rankings and we placed 3rd which means we move on to the next level of playoffs.

BTW the 1st and 2md placed two teams were the teams we lost too. We played our first playoff game last night against team number 2. It was one of the best little league games I had ever watched. After the top of the 3rd inning the score as 1-1. We played back and forth like this until the final inning. Unfortunately our defense made a few bloopers and we went into the bottom of the 6th 10-5. We managed to squeak out one more run and lost 10-6.

Nick played a great game, catching a long pop fly in outfield, and had two great hits and was walked once. He finished up the game as pitcher. He pitched great but it just didn’t come together for the team. I thought this was our final game but it turns out it is double elimination so it appears we will be playing once again tomorrow.