Home » Reviews » Party Time With Reverse Charades
As an Amazon Associate I earn from qualifying purchases. 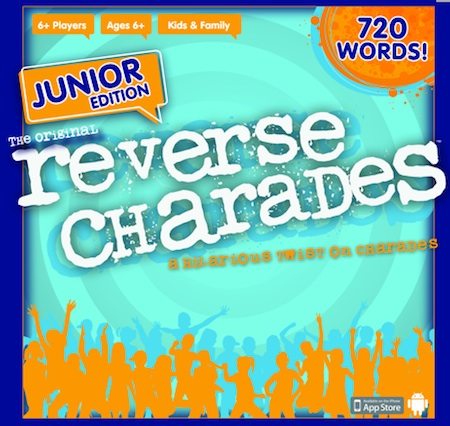 The kids and I had a chance to break into another game for review called Reverse Charades. The point of the game is similar to normal charades but with a little twist. Instead of one person doing the charades and everyone trying to guess what they are doing you have one person guessing and everyone else doing the charade. The game is played in teams.

How To Play Reverse Charades

We did not have enough people to form a team with only four of us so we ditched the rules and made up our own, basically playing reverse reverse charades or normal charades, but for fun. We kept score by giving the person doing the charade and the person guessing the charade one point. This way there was no throwing the charade so no one would get a point.

The game turned into a fit of laughter as everyone tried to act out what was on the card. I’m usually pretty good at these games as my mind is able to dissect the hard words and I can’t get players to guess by piecing things together. While Reverse Charades was new to all of us the game of charades in general was new to my daughter who had never played before. So when it was her turn I helped her by telling her what to act out to get everyone to guess the word.

Eventually we just stopped keeping score and took turns acting and guessing and it was definitely a good time. I can definitely see this as an entertaining game during a party. With everyone trying to act out the same thing in different ways I see nothing but laughter and fun.