Home » Giveaways » Phineas & Ferb the Movie : Across the 2nd Dimension Giveaway : (Ends 9/23)
As an Amazon Associate I earn from qualifying purchases. 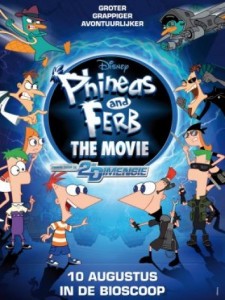 The premiere of Phineas & Ferb the Movie : Across the 2nd Dimension was August 5th.  At this time I was in San Diego at BlogHer11′ and believe it or not was a little disappointed I wasn’t home to watch it with the kids. I saw the previews and thought it looked pretty good. I felt it was a good movie to enjoy with the family. It’s not always easy finding a movie that the older boys and Honey like as well as myself. However Phineas & Ferb has always appealed to me. I love the sneaky brother and the sister trying to catch him (Ferris Bueller’s Day Off in cartoon format)

I figured without me there to remind them there was no way the kids were going to watch this movie. Also being 3 hours behind them on the west coast and busy as could be I didn’t even think to remind them over the phone ahead of time. To my surprise when I returned home Buddy told me that the three kids did indeed watch the movie together. When I saw it was coming out on DVD and I had the chance to review it and even give one away to my readers I thought great it would be an opportunity for me to finally watch it. Well….I haven’t actually gotten a chance to sit down and watch it myself. Each day I seem to get busier and busier. 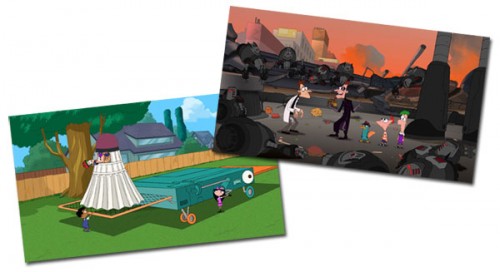 I did ask Buddy about the movie and he said it was really good.

Phineas and Ferb The Movie: Across The 2nd Dimension features Disney Channel’s dynamic animated duo, Phineas Flynn and his stepbrother Ferb Fletcher, as they go on their biggest adventure yet. When the boys discover that their pet platypus Perry is in fact a secret agent who battles the forces of evil daily, they join him on a grand adventure that blasts them to another dimension where a truly evil Dr. Doofenshmirtz has taken over an alternate Tri-­state Area. This larger than life, action-­packed adventure will have the entire family laughing out loud!

Yep that was his review, “It was good”. So to expand on that a little it was good enough to capture the attention of all three kids for the duration of the movie so you can probably draw your own conclusions from that. I’m hoping to set down and watch it one of these rainy days of September. Here is a little bit of information regarding what you get in the special 2-­Disc “Ultimate Fan Pack”

This special 2-­Disc “Ultimate Fan Pack” also includes a variety of cool bonus features (i.e., eight deleted scenes, an exclusive song, a sing-­along “Perry-­oke” feature, and a bonus episode). The Digital Copy lets viewers transfer the movie and the eight digital music tracks onto their laptop and/or portable devices of choice – to watch the movie or listen to songs anytime, anywhere and at the touch of a button. The Ultimate Fan Pack is the perfect gift for teens and/or families on-­the-­go!

See Official Rules. Giveaway will end on September 23rd at 11:59 pm EST. Open to US Only.