Home » Lifestyle » Entertainment » Movies » Pirates of the Caribbean : On Stranger Tides Trailer
As an Amazon Associate I earn from qualifying purchases.

This is one movie that we have been waiting to hit theaters. In fact I would LOVE to find a premiere and see it a little early (hint! hint!). I have absolutely loved the prior three movies. Johnny Depp has brought such fun and character to Jack Sparrow it is worth watching him alone.

I’m excited to be able to bring to you the trailer to Pirates of the Caribbean: On Stranger Tides to be released in the theaters on May 20, 2011.

To make this movie even more enjoyable it is being released in 3D.

Based on characters created by: Ted Elliott & Terry Rossio and Stuart Beattie and Jay Wolpert

Suggested by the novel by: Tim Powers

Produced by Jerry Bruckheimer and directed by Rob Marshall, “Pirates of the Caribbean: On Stranger Tides” captures the fun, adventure and humor that ignited the hit franchise—this time in Disney Digital 3D™. Johnny Depp returns to his iconic role of Captain Jack Sparrow in an action-packed adventure. Crossing paths with the enigmatic Angelica (Penélope Cruz), he’s not sure if it’s love—or if she’s a ruthless con artist who’s using him to find the fabled Fountain of Youth. When she forces him aboard the “Queen Anne’s Revenge,” the ship of the legendary pirate Blackbeard (Ian McShane), Jack finds himself on an unexpected adventure in which he doesn’t know whom to fear more: Blackbeard or Angelica, with whom he shares a mysterious past. The international cast includes franchise vets Geoffrey Rush as the vengeful Captain Hector Barbossa and Kevin R. McNally as Captain Jack’s longtime comrade Joshamee Gibbs, plus Sam Claflin as a stalwart missionary and Astrid Bergès-Frisbey as a mysterious mermaid. 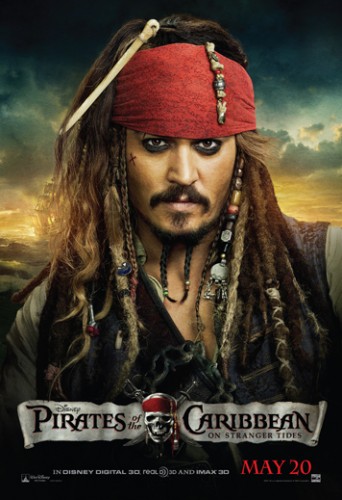 Captain Jack Sparrow (Johnny Depp) finds himself on an unexpected journey to the fabled Fountain of Youth when a woman from his past (Penélope Cruz) forces him aboard the Queen Anne’s Revenge, the ship of the formidable pirate Blackbeard (Ian McShane).