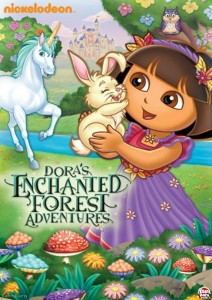 Dora and Boots must defend the kingdom of the Enchanted Forest, travel to Atlantis and save King Unicornio in this epic three-part adventure, which includes a special double-length feature!  As an added bonus, a one-year free subscription to Parents magazine is included in the DVD for a limited time only.  Created by Nickelodeon Home Entertainment and distributed by Paramount Home Entertainment, Dora the Explorer: Dora’s Enchanted Forest Adventures will be released on DVD for the suggested retail price of $19.99.

Tale of the Unicorn King
All of the forest animals choose Unicornio as the King of the Enchanted Forest. The animals think Unicornio is kind, smart, brave and strong but Unicornio is shy and doesn’t think he’s any of those things.  Dora and Boots must prove to Unicornio that he can be King.

The Secret of Atlantis
Dora and Boots are at the beach when they see Diego riding in on a dolphin.  He just went on an undersea adventure and found the legendary lost continent of Atlantis where he finds out why it disappeared from the Earth.  Diego recruits Dora, Boots and King Unicornio to help him end an ancient feud between unicorns and dragons as it’s the only way to make Atlantis rise.

Honey is actually more of a Diego fan but she has probably also seen every Dora episode. She has learned quite a little bit of Spanish watching Dora. Dora is a great cartoon that appeals to young children. I love the lessons that are learned while maintaining your child’s attention.

Price: The price of $13.99 is about average and what we would expect to pay for a DVD of this nature. This DVD runs for 93 minutes and includes a few different episodes.

Recommendation: We highly recommend the DVD for any Dora fans, it is cute and chalked full of Dora’s explorations.

Age Recommendation: We recommend the Dora movies for any age, but feel it is perfect fr 4-6 year olds especially.