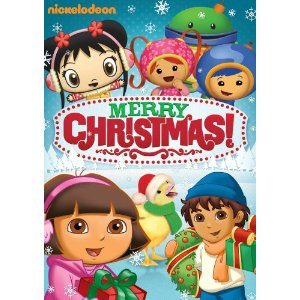 Dora the Explorer – A Present for Santa
It’s Christmas Eve and Dora and Boots are going all the way to the North Pole to deliver a present to Santa.  They must travel over the snowy mountains and across an icy river, but by the end of the journey, everyone is filled with the holiday spirit.

Go, Diego, Go! – Diego Saves Christmas!
When Santa’s sleigh gets stuck under a snow hill, Diego enlists the help of Linda the Llama to pull the sleigh out of the snow.

The Wonder Pets! – Save the Reindeer (Double Length Episode)
The Wonder Pets are celebrating Christmas Eve when they get a call from Santa’s baby reindeer.  They head to the North Pole and find her stuck on ice.  It’s up to the Wonder Pets to save Christmas!

Team Umizoomi – Santa’s Little Fixers
It’s Christmas Eve and someone calls in on the Umi Alarm from far away… it’s Santa Claus! Santa’s toy-making machine is broken and Team Umizoomi must help fix it.

Ni Hao, Kai-lan – The Snowiest Ride
Kai-lan wakes up to see snow blanketing the whole backyard. After borrowing a sled from Yeye, she gathers all her friends together to sled down a hill.  Everyone is excited except for Tolee and Kai-lan must help him overcome his fear of sledding.