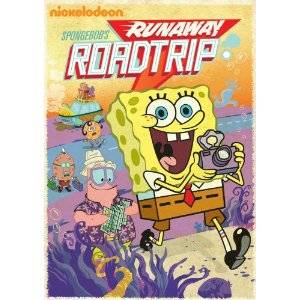 New York, NY – August 1, 2011 – Join SpongeBob and Patrick for a never-before-seen hilarious and adventurous vacation in the DVD debut of SpongeBob SquarePants: SpongeBob’s Runaway Roadtrip, which arrives on store shelves before its on-air premiere in November 2011. Enjoy the Great Barrier Reef, a romantic cruise, a trip to the Ocean Mint, a homebound holiday and a trip that’s out of this world.  Featuring six adventures in one grand vacation, everyone just might need a vacation from this much fun packed into one DVD.  Created by Nickelodeon Home  Entertainment and distributed by Paramount Home Entertainment, SpongeBob SquarePants: SpongeBob’s Runaway Roadtrip is available on DVD Sept. 20, 2011, for the suggested retail price of $16.99.

Since its launch in July 1999, SpongeBob SquarePants

has emerged as a pop culture phenomenon. The series has been the number-one animated program with kids 2-11 for more than 10 consecutive years and over the past several years, it has averaged more than 100,000,000 total viewers every quarter across all Nickelodeon networks. Syndicated in 171 markets in 36 languages, it’s the most widely distributed property in MTV Networks’ history. SpongeBob SquarePants has a huge online following as well, currently with more than 26 million fans on Facebook.