Home » Lifestyle » Entertainment » Movies » Real Steel Is It Worth the Ticket Price?
As an Amazon Associate I earn from qualifying purchases. 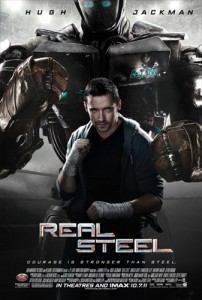 So my eye catching title drew you in. You are wondering should I spend the price of a movie ticket to see this movie? Is fighting robots my cup of tea? Will I be able to sit through this movie? Is it full of action or slow? Does the trailer show it all or is there more? Can I take my children? You have come to the right place because Shibley Smiles has had the chance to pre-screen this movie and I’m here to answer all these questions and more.

First let me give you a little back ground on this movie because this is not, contrary to popular belief, a movie about fighting robots. Yes the movie contains many robots and they do fight but it is not the heart of the story. Real Steel is a story of a washed-up boxer Charlie Kenton, played by Hugh Jackman (The X-Men) who’s sport has been taken over by 8-foot steel robots. Just as things take an even more desperate turn in his life his estranged son Max played by Dakota Goyo (Thor) arrives on the scene. As the duo reluctantly team up to rebuild and train Atom a scrap-heap robot the film takes you through the turbulent relationship of father and son.

Director Shawn Levy (Cheaper By the Dozen) says, “The main characters – a father, his son and a machine – are each abandoned beings…All three of them have been cast aside and forgotten.  The substance of the story is about how this trinity has a chance of returning to grace.”

Still wavering on whether to see this movie or not? Let me help you. GO SEE IT! This movie is phenomenal! It has my vote for best movie of the year. I will be honest I really didn’t know much about this movie other then it contained fighting robots and a sexy leading man. I was blown away by the “heart” of this film. There are really no other words beyond “heart” and “courage” to sum up the essence of this movie. It is not often that you can find yourself tearing up at a movie theater showcasing fighting robots in a boxing ring. I found the acting of Dakota Goyo to be amazing, and he brought the character Max to life in away I’m not sure any other actor could have done. I read a review just recently that claimed adding a “child” to Real Steel made the movie a “lot less sexy”. I’m here to tell you there is nothing further from the truth. This mama finds Hugh Jackman sexier then ever and his character only becomes sexier throughout the course of the movie. As each layer is pealed away and the tough “steel” that surrounds him melts away and you are left with the “real” Charlie and enjoying him with each passing moment.

Real Steel has everything an A+ movie needs, it is full of action, emotion, and heart, and yeah it has really cool fighting robots. Nothing can be more moving then a parent fighting for his child, the robots are just an added bonus. You will find yourself falling in love with not only Max and Charlie but with Atom. Atom is the forgotten robot found by Max in an old robot scrap yard. With some tender loving care and training Atom captures the heart of Max and movie goers alike.

The question that always arises when trying to take your family to a movie is what age is this movie intended for. I will start by saying two things. One this movie is rated PG-13 and two take my review as you would with the preface that I consider myself more lenient when it comes to my children and movies. Overall I believe the rating of PG-13 is appropriate for a couple of reasons. The first, you will find curse words scattered throughout the movie including some spoken by Goyo himself. In addition to the cursing there is a particular scene in which Charlie and Max find themselves in trouble and are roughed up. There is of course fighting throughout the movie, I mean it is a movie with a heavy emphasis on boxing, kind of hard not to have any fighting.

After watching the movie I knew without a doubt my two boys would LOVE this movie. However I was on the fence about taking my daughter (she is almost 6). Not however for the reasons above. My reason for wavering was I wasn’t sure if it would hold her attention. After talking with both director Shawn Levy and Hugh Jackman personally regarding there thoughts and if they took their own young children it made the decision for me. Both director and actor took their children to see the movie and it was enjoyed by all. Both men were passionate about the movie and intended audience. This film is by all means a family movie, it was intended for each family member to enjoy on their level. I like to say the “Real” is for women and the “Steel” is for men. For this reason Honey will be attending this movie with the rest of the family. I am eager to see if she enjoys the movie and it holds her attention.

This is a great family film and I would not want the fighting robots to shadow the true meaning and heart of this movie and keep you from seeing such a phenomenal movie. It is amazing that such an action packed movie can bring forth such heartfelt emotions. I highly recommend you take your whole family, you will not be disappointed.

After you see the movie (or if you already have) I want to know which is your favorite robot?

Look for many up coming fun post regarding Real Steel here at Shibley Smiles. You will soon find a Real Steel giveaway as well as some exciting Q&A sessions when I had the chance to interview the producers Don Murphy and Susan Montford, writer John Gatins, boxing consultant Sugar Ray Leonard, actor Anthony Mackie (The Hurt Locker) who plays Finn, and Hugh Jackman. Each of these talented people are passionate about this film and hope that you feel the same way, I know I do!

Real Steel opens in theaters and IMAX on October 7, 2011.

Disclaimer: I was the guest of DreamWorks and Disney as part of a Real Steel press junket.