So you heard about are hotel : Hilton Orlando, and I’ve shown you a few pictures of the kiddo’s : Wordless Wednesday but I haven’t had a chance to talk about our fun day at Sea World. We decided to get up and get to the park as early as possible. I had intended on getting there at 9 when it opened but we made it there around 9:30.

There was a 10am dolphin show and Honey was very excited about seeing the show so that was our fist stop. It was pretty crowded already when we got there but thankfully the stadium is so big and even in the top seats you get a good view.  Watching Honey’s face as she watched the dolphins made my day! There is nothing better then watching the fascination and wonder on a child’s face. 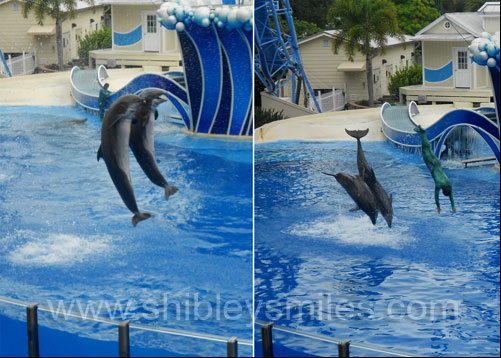 After the show we circled back a round to Stingray Lagoon and Dolphin Cove.  Sadly the dolphins did not come close enough for a pet. The stingray’s did but none of us were brave enough to stick our hands into the tank.

The boys of course were all about the roller coasters.  We all went on Journey to Atlantis which is a flume ride. We even talked hubby into it.  We went down the flume and miraculously I was try. I thought I had escaped with just a few drops of water.  That was until we turned the corner and I managed to get a face full of water from where I still have no idea.  By the time the ride ended I was pretty soaked. Note: Don’t wear WHITE shorts to a water park!

Honey enjoyed the ride but was to small to ride the Kraken which is a full blown upside down twist and turn roller coaster. So while the boys and I waited in line he took her around to some shops, they visited the manatee’s and the alligators.  The wait time was 60 minutes but it went pretty fast and I don’t think we waited more then 30.  I definitely enjoyed the roller coaster more then I enjoyed the ones at Islands of Adventure.

We visited most of the animals the penguins were neat, but I felt kind of bad because it seemed like there were just so many penguins in such a small enclosed space. 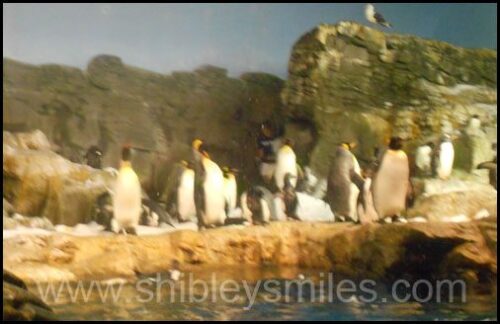 The kids stopped for a photo with the penguins. Look Honey is even holding his hand. 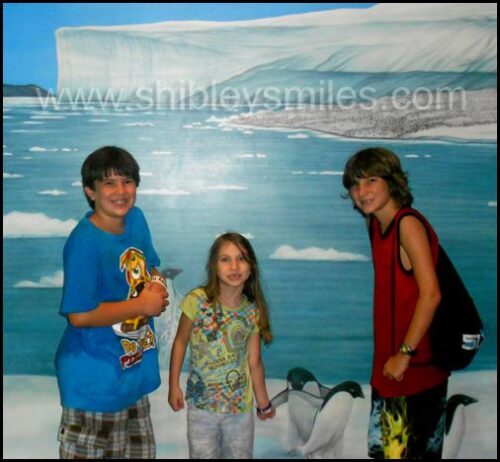 Surprisingly Honey really enjoyed the shark enclosure where you walk through a tunnel and the sharks swim all around you even over head.

However I really liked the seals, but man can they make a load noise. I tried to get some on video but wouldn’t you know they were camera shy and got really quiet. I really love this photo. 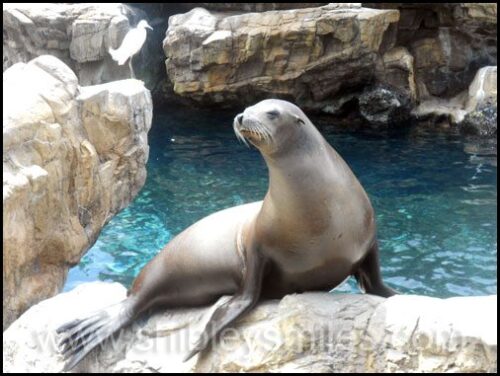 After we visited a few of the local residents we decided to take in another show. You can’t leave Sea World without seeing the Shamu Show 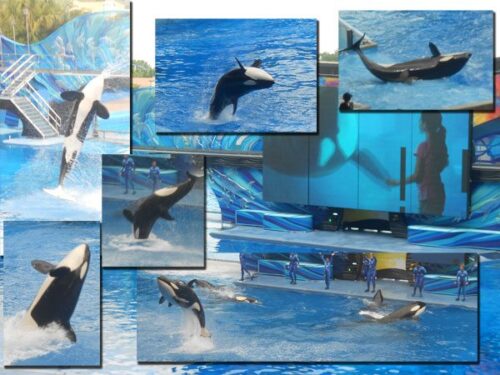 The only downer of the day was the weather.  The cloudiness was great as it keep the sunning for beating down on  us as we walked the park all day. However the rain was definitely not on our agenda and I’m not sure who invited it to the party.  We were just at the smaller children’s area and ready to take Honey on some rides when it started to rain, and then it began to pour. We all huddled underneath a small concession stand.  Honey thought it would be fun to play in the rain.  This is what  you get on a rainy day at Sea World. 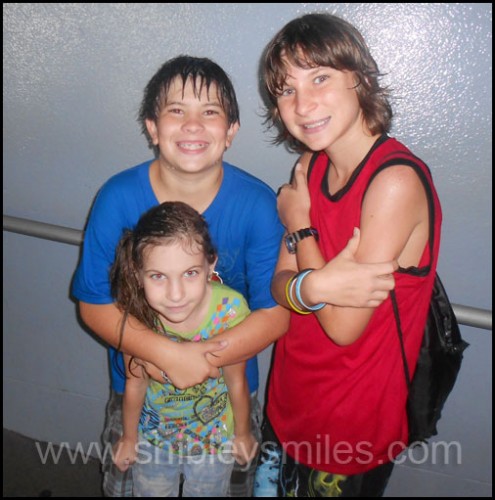 Once the rain stopped we decided to skip the rides for a form of larger shelter and ended up at the Wild Arctic.  The only disappointment at this point was that everyone was cold from the rain and we were headed into an air conditioned building.  Despite the discomfort everyone enjoyed the ride which was a helicopter simulation.  I will say that simulator rides are one of Honey’s favorite things. She laughs and laughs which just makes me laugh. After the ride the children explored some arctic caves. 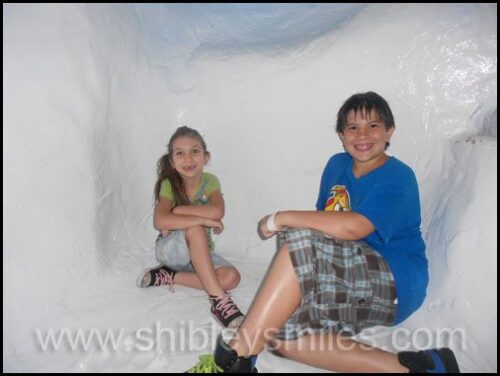 Overall we had a pretty good time. The boys really wanted to ride the roller coasters more. We did also ride the Manta after the rain, the rain seemed to clear out the park some so our wait was only 15 minutes.  Honey’s favorite were the shows.  I found that it is hard to make everyone completely happy. Honey couldn’t ride the rides the boys wanted and wanted to watch more shows. The boys wanted to watch less shows and more rides. Dad HATES roller coasters and I had to go against his wishes to allow the kids to ride the roller coasters. You can’t take kids to a park and expect them to NOT ride them.

Of course no vacation would be complete with out a family photo. I splurged and purchased the photo they Sea World employees took when we first entered the park, before we all became wet swamp rats. 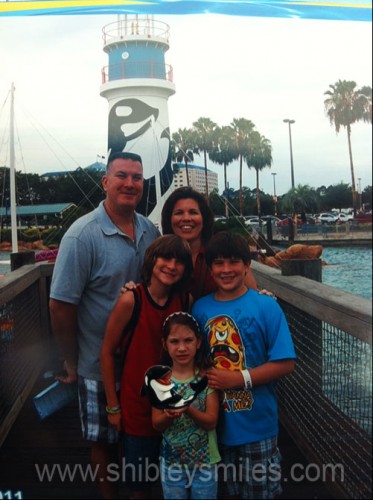