Home » Blog » Weekend of Water and Fun at Aquatica and Sea World
As an Amazon Associate I earn from qualifying purchases.

Last weekend Shibley Smiles was invited, with quite a few other bloggers, to a special event at SeaWorld Orlando, in honor of the new attraction Antarctica: Empire of the Penguin. Since we live in South Florida, about two and a half hours away, we decided to make a mini vacation out of the outing and spent two nights at Residence Inn Orlando at SeaWorld. We drove up Friday after work to get a fresh start on our fun Saturday morning.

We received complimentary tickets to both Aquatica and SeaWorld for the day and we wanted to be sure to get in all the fun we could. We had never been to Aquatica before but with temperatures in the 90’s it was the perfect start to an otherwise hot and humid day. The kids, hubby, and I had a great time at the park, and wished we could have stayed the whole day. We went on a few slides and enjoyed a lazy ride down the lazy river, but Honey loved the wave pool the most. The boys really wanted to ride the Dolphin Plunge but that line was ridiculously long and they are not very good line waiters LOL!

My favorite ride/part was the Roa Rapid’s. Everyone gets in wearing a life jacket and the water is so forceful it just propels you through the water. In fact when we got to the exit my husband and daughter decided it was time to get out but did not warn us in enough time and my youngest son and I could not make our way to the exit and had to go around one more time. I hung on and tried to get back but the rapids were so strong it was just impossible.

Though we could have stayed the rest of the day we left the park at 1:30 to grab some lunch at the hotel and get cleaned up for our SeaWorld adventure and event that was to start at 5:00. A tip for anyone going to Aquatica. It may open at 9am but I urge you to get their ahead of time. The car line just to get into the park was very long and we spent a good 20 minutes just getting up to the gate. If you stay at a hotel that allows early access I strongly suggest you take advantage.

After some food in our belly’s and a good shower we headed over to SeaWorld at about 3pm. It was then that we really noticed how hot the day was. Having been in the water most of the day it wasn’t really noticed. Honey, hubby, and I spent a couple hours doing some animal sightings while the boys road a few rides with their quick queue pass we received from our hotel. Then at 5pm we met up with the rest of the bloggers and headed over to the Antarctica: Empire of the Penguin ride to in VIP glory. (This means we got to skip the 1 1/2 hour line and went straight to start, did not pass go!)

Empire of the Penguins at SeaWorld 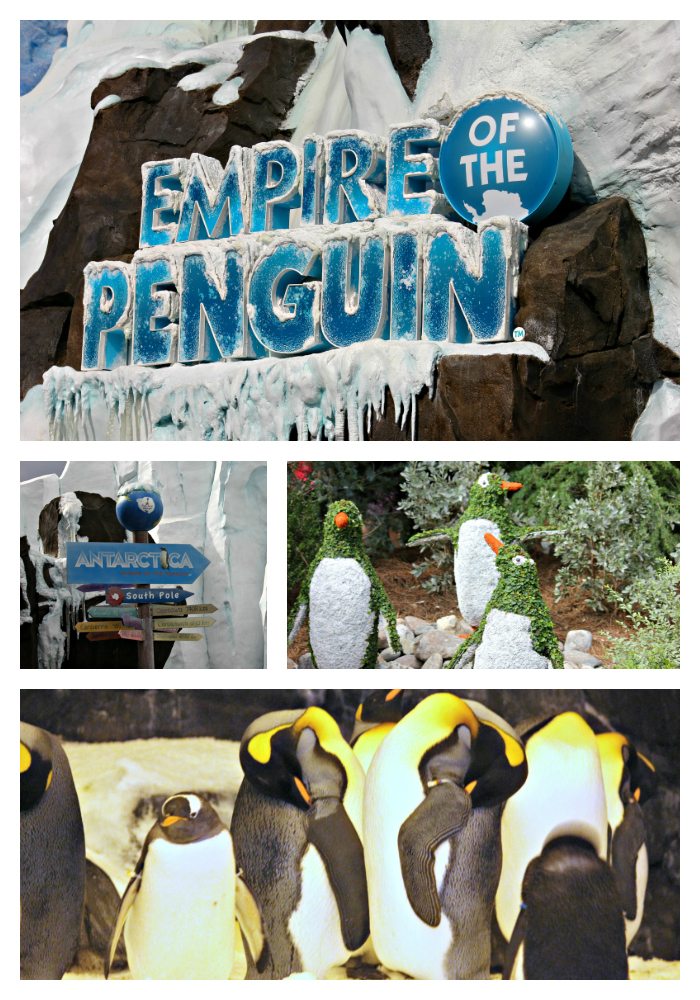 Empire of the Penguin is a ride that takes you through the journey of a little penguin named “Puck”. From his late arrival through the underwater and icy weather known to Antarctica.  The ride spins and twirls as the journey is displayed on large protection screens. You will even experience the icy winds a time or two. After the ride is over you are able to walk through the Penguin exhibit. You can take photos as long as you do not use the flash. Honey enjoyed the ride but I think she was more excited about the penguins themselves. As we waited for everyone to finish and reunite with our group we took a few photos to remember our trip. 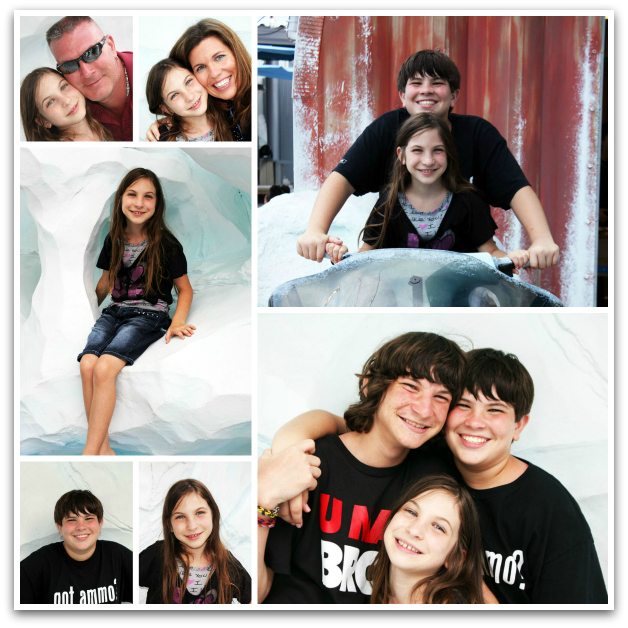 After our icy adventure we headed next door to the Expedition Cafe for a bite to eat. The cafe hosted several different cuisines from Italian, Asian, and American. Honey, hubby, and I went decided on some orange chicken with rice, while boys went for their normal chicken nuggets and fries. By know the sun was setting and the park was rather comfortable with a small breeze. After dinner and some souvenir shopping we headed over to the children’s area so Honey could ride some rides that were more suited for her.  It has been a long time since I had been in a theme park at night but I have to admit with the sun no longer in the sky it really made the walking and waiting in lines much more comfortable. I came to a conclusion on this trip, and that is I suffer from a mild case of motion sickness. I have no problems on fast whipping, upside down roller coasters like the Kraken, however get me in a small room with moving chairs, or spinning in a small tea cup and I don’t feel well at all. This happened the last couple times I was at a theme park and rode the same type of rides but I chalked it up to not feeling well or the hot weather. Nope, I definitely have some type of motion sickness.

At 9pm we made our way over to watch the Shamu Rocks show. This was something Honey was really looking forward too. I made one mistake, and that was assuming that when we were told we had VIP seats, that it meant we had saved seats in a specific section. So we arrived 15 minutes before the show. However it turns out the VIP section was pretty much full. In order to sit in the section we were going to have to sit apart which was not something we really wanted to do. Honey was so upset thinking she wasn’t going to get to see the show, but Daddy prevailed and found us some seats, even if they were over on the side at the very top. It was worth it because Honey thought it was definitely the best show, and better then the daytime Shamu show.

We had a great time visiting both of the parks and wished we could stay longer. Our hotel worked out perfect (more on that late) and we can’t think SeaWorld enough for having us and allowing us to be part of this fun event at SeaWorld to experience Antarctica: Empire of the Penguin!