Home » Lifestyle » Everything Else » Secure Your Identity with LifeLock
As an Amazon Associate I earn from qualifying purchases.

I actually currently have LifeLock and I absolutely love it. In fact, it is because of LifeLock that I began the path to purchasing a home. That is a story for another day. Everyone has heard of identity theft. You are warned about it, told to create super-duper hard to break passwords, only use secure sites, and check your credit often. The question is how many people do this?

If you have a hard to break password you tend to forget it. If you want to buy something you presume the site is secure, and we usually only check our credit when we need to know. However if you have ever had any form of identity theft then you know it is not a fun path to take. It causes you many problems and heartaches when you did nothing wrong.

For example I have a co-worker that when she filed her tax return one year she was told that she had already filed it and they would not accept her return. She was at a loss for what to do. See someone had used her identity to file a false return and get a refund. This means she was unable to get her refund. It took her months of calling several times to get everything worked out. Just when she thought the nightmare was behind her the same thing happened the following year. Now there are several things she can’t do easily because she has to have pass codes and make calls just to secure keep her identity secure. 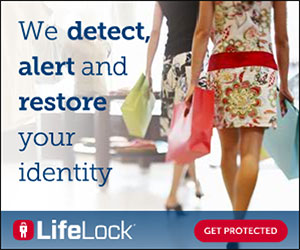 My mother experienced the same thing just last year. She tried to file her return to be told the same thing as my co-worker. Not only that but her own co-worker had it happen to her the year before. In their case they believe it may be someone in the payroll department either in house our outsource that was stealing identities and filing returns to be issued a refund. My mother is still working through her own issue.

These are just what I would consider “small” cases of identity theft. Imagine if someone was opening credit cards in your name, had access to your bank accounts, or make large purchases like cars or homes. I know once in a while I will get some type of email that seems suspicious and I will immediately check my accounts to make sure that there hasn’t been any odd activity.

As a member of LifeLock I feel secure in knowing that I am doing something to ward off identity theft as much as possible. LifeLock will alert me when my credit is used. I have been on the phone while my credit is being run and I will get an email or text message before I’m even off the phone letting me know there has been activity. When passwords are sold on the black market I have been notified if mine has been sold. I even get enough information to determine if what is sold matches my identity. Thanks to LifeLock I have made several changes.

Right now you can visit the LifeLock site and use this promo code “LifeLocksecure” to get 10% off a LifeLock membership.

« 5 Tips to Get the Goodness Back in Your Hair
We Can Finally Swim! »