Home » Lifestyle » Entertainment » Movies » Shibley Smiles Opinions of Brave from Disney/Pixar
As an Amazon Associate I earn from qualifying purchases. 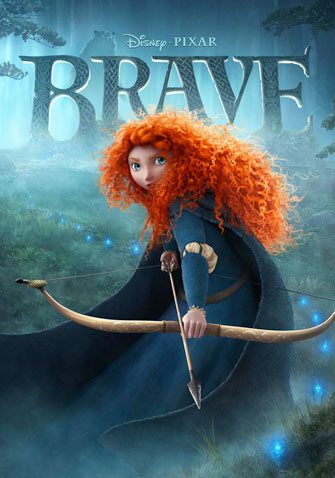 I had no preconceived opinions or notions about the movie Brave before the kids and I sat down June 14th for a pre-screening of this adventurous Disney/Pixar movie. When I accepted the invite I thought this would be a great movie to take my daughter to. I mean it is Disney and animated and I figured it would be “her” thing. The boys joined as and unfortunately my husband was stuck at work until just about 7pm and missed coming with us. I was hoping I was correct and this movie would be appropriate for my young daughter.

The  Brave movie we attended was in the Digital 3D. I love 3D movies! I don’t want to give away too much of the movie I don’t want to ruin it for others. The moral or main story plot revolves around Merida being forced to live up to her mother’s expectations when they are different then what she herself wants. The movie takes you through the ups and down of the mother/daughter relationship and how the mishaps in the story bring an understanding to both Merida and her mother. I found this story to be beautiful and really made the movie for me, it was a story of learning, understanding, and bravery.

The color was rich and the animation beautiful. The characters came to life and jumped off the screen, literally (you know 3D). Merida could be likened to your typical teenager wanting to break free and be her own person. Her three small brothers were mischievous little boys causing unexpected chaos and helping Merida and her mother at one point break out of the castle unnoticed. These scenes gave the movie Brave some of the funniest moments.

The appearance of bears is abundant  from the beginning until the end. It is the actions of the bears, the loud growls and fighting is part of what gives this rating a PG.  If you ask me what age I think this movie is for I must say it is definitely a case by case basis. In my opinion I would say not under the age of 6. My daughter is 6 1/2 and she enjoyed the movie however there were parts in the movie when she grabbed my arm and said she was a little scared. This was usually when the screen was dark, and the bears were present. The movie having many scenes in the woods does appear dark at times and many of the scenes take place during the night. There is a scene where Merida is trying to get away from a bear that can be intense for young children.

PG Rating
A PG-rated film may not be suitable for children. The MPAA says a PG-rated should be checked out by parents before allowing younger children to see the movie. There could be some profanity, some violence, or brief nudity, however there will not be any drug use in a PG film.

I loved that the setting of the movie was in Scotland, and enjoyed the Scottish accents by the actors portraying the characters. I asked each of my children what their favorite part of the movie was. Each of them had a different answer and when they answered each of them agreed with the other. There were several great parts of this movie. I laughed a lot during this movie. I also cried at a few parts as well. To be fair it doesn’t take me much to cry ever since I had children. However the movie definitely brought out a range of emotions and I found it refreshing.

To sum it up my opinion of the movie is a “must see”. I loved it and enjoyed it immensely. In fact I wouldn’t mind seeing it again. Though my age recommendation is 6 and above it is really dependent on your child and how you handle darker screens, and loud noises, and some violence.

Since ancient times, stories of epic battles and mystical legends have been passed through the generations across the rugged and mysterious Highlands of Scotland. In “Brave,” a new tale joins the lore when the courageous Merida (voice of Kelly Macdonald) confronts tradition, destiny and the fiercest of beasts.

Merida is a skilled archer and impetuous daughter of King Fergus (voice of Billy Connolly) and Queen Elinor (voice of Emma Thompson). Determined to carve her own path in life, Merida defies an age-old custom sacred to the uproarious lords of the land: massive Lord MacGuffin (voice of Kevin McKidd), surly Lord Macintosh (voice of Craig Ferguson) and cantankerous Lord Dingwall (voice of Robbie Coltrane). Merida’s actions inadvertently unleash chaos and fury in the kingdom, and when she turns to an eccentric old Wise Woman (voice of Julie Walters) for help, she is granted an ill-fated wish. The ensuing peril forces Merida to discover the meaning of true bravery in order to undo a beastly curse before it’s too late.

And just have to save totally LOVE the big red hair so jealous!