Home » Lifestyle » Everything Else » Sonic Bomb Alarm Clock The Bomb? Or A Bomb?
As an Amazon Associate I earn from qualifying purchases.

I had been contemplating purchasing the Sonic Bomb Alarm Clock from Think Geek for my son. Before I go and plunk down $40 for an alarm clock I need to know the answer to the ultimate questions. Was this going to be “The Bomb” and wake my sleepy head son up in the morning on his own or was it going to be “A Bomb” and allow my sleeping head son the chance to sleep through it in ignorant bliss.

I’ve never heard a sonic bomb go off but I have heard a sonic boom. Have you? It nearly made me pee my pants. I was alone at home one day when I was in high school when the house shook suddenly and the loudest noise could be heard outside. I ran to the front door thinking someone had actually run right into our house and was surprised when I was met with pure sunshine and a calm breeze. It was only later I realized what it was. Living in Florida it was not uncommon to hear a sonic boom now and then when the space shuttle landed it was just the first time I had heard it. 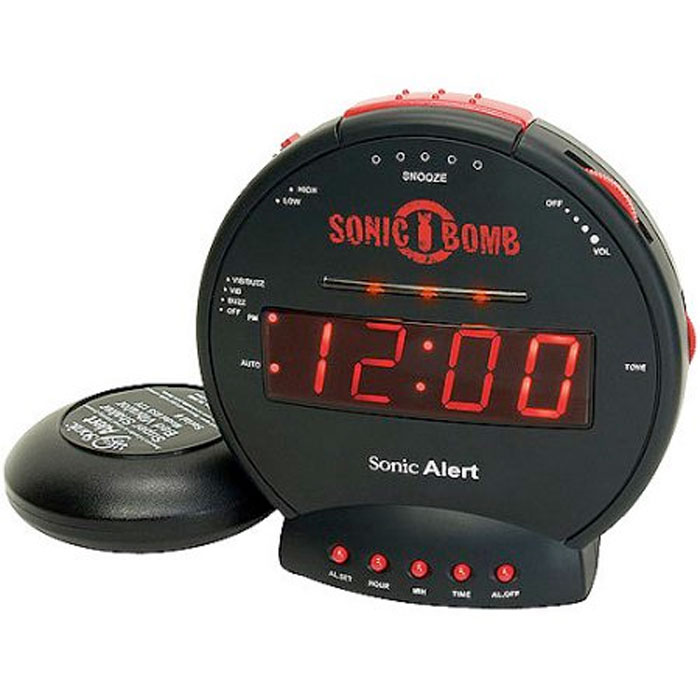 I tried to get the sound of the vibrating bed. Yes I said vibrating bed, this sonic bomb alarm clock vibrates your bed when it goes off. It is quick strong burst of vibration that pulse until you turn the clock off. The Bomb or A Bomb?
The Bomb!

Yep this thing wakes my son up every time. In fact he doesn’t even use the noise portion just the vibration alone wakes him up.The other day I was getting ready in my bathroom and I could actually hear the vibration. It was not a loud sound it must put out some good sound waves.

I highly recommend this if you have a sleeping head like me it is “The Bomb, The Sonic Bomb!”

Update October 22, 2017: It is now more than 6 years later and believe it or not my son STILL uses his Sonic Bomb Alarm Clock. In fact, now he relies more on the vibration then the alarm. There are times when he is away from home (he is now 20) and he forgets to turn off his alarm. The vibration is actually loud enough, or maybe an out of the ordinary sound, that it wakes up my daughter in the next room. So after 6 years we still highly recommend the Sonic Bomb Alarm Clock!