As a child growing up in Florida (in the Tampa Bay area) space shuttle launches and sonic bombs were a way of life. We got to go outside as a class to watch the shuttles launch. Things have not change as an adult, I remember recently at work going outside to watch the last launch. For this reason I just felt compelled to share with you the press release that made it to my email. This is another historic yet sad day for NASA. 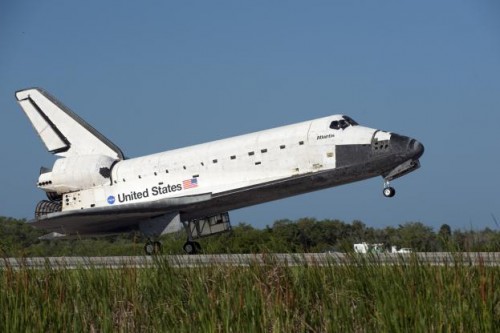 Last Shuttle to Fly in Space Will Arrive Nov. 2 at its Future $100 Million Exhibit

KENNEDY SPACE CENTER, Fla. (Oct. 17, 2012) – Fans of NASA’s Space Shuttle Program will have their last opportunity to see an orbiter on the move when Atlantis makes its historic final journey on Nov. 2 at Kennedy Space Center.

Atlantis will travel the nearly 10 miles from Kennedy Space Center to its new home at Kennedy Space Center Visitor Complex. Because of crowd logistics and security – 70 percent of the route is in the restricted area of the space center – the only viewing opportunities for the move are being offered by the visitor complex via two different ticket packages requiring advance reservations.

The move will begin at 7 a.m. when Atlantis leaves Kennedy Space Center’s Vehicle Assembly Building (VAB) at about 2 miles per hour on the 106-foot-long Orbiter Transporter System. The orbiter will make its way to Kennedy Space Center headquarters where at about 9:45 a.m. thousands of current NASA employees and former shuttle workers are scheduled to attend a private event that will include a ceremony to mark the transfer of Atlantis to the visitor complex.

Atlantis will then head to Space Florida’s Exploration Park, a 65-acre area that will provide a festival setting for a half-day event where guests can see the shuttle up close and “in the round.” NASA Administrator Charles Bolden, Kennedy Space Center Director Robert Cabana and the space shuttle astronauts from STS-135, the final shuttle and Atlantis mission, are also expected to attend.

In addition, Exploration Park will feature spaceflight and exploration exhibits provided by several space industry partners and NASA, including the Orion Crew Module, designed for deep space human exploration as the flagship of the nation’s next-generation space fleet.

The Exploration Park portion of the day is open to those purchasing the special Explorer Package, which includes regular Kennedy Space Center Visitor Complex admission.

“The final trip of Atlantis will be the very last time anyone is going to see a space shuttle in motion or out in the open, making it a truly unique and momentous viewing opportunity,” said Bill Moore, chief operating officer of Kennedy Space Center Visitor Complex for Delaware North Companies Parks & Resorts, which operates the visitor complex for NASA.

“Atlantis is a spacecraft that has flown 33 missions into space, logging more than 125 million miles, and it was the last orbiter in space and the last to touch down at Kennedy Space Center. Seeing the orbiter up close will be an emotional experience,” Moore said.

Atlantis will then leave Exploration Park and complete the final leg of its journey, traveling in front of Kennedy Space Center Visitor Complex along State Road 405/NASA Parkway before entering its new home, a $100 million interactive exhibit complex currently under construction and set to open in July 2013.

After the approximate 6 p.m. arrival, a 10-minute fireworks show will illuminate the skies of Kennedy Space Center Visitor Complex, providing the grand finale to an extraordinary day. Explorer Package and regular visitor complex admission holders, through the Rollover Package, can witness the last part of Atlantis’s journey as it enters the visitor complex.

NASA and Delaware North have spent the past year and a half planning the challenging logistics of Atlantis’s 10-mile trek with a team of workers set to remove and replace 120 light poles, 23 traffic signals, 56 traffic signs and one high-voltage power line to make way for the orbiter.

Below are details of the two ticket packages being offered for Nov. 2:

o Displays to view the Orion Crew Module, designed for deep space human exploration as the flagship of the nation’s next-generation space fleet.

In addition to the Atlantis viewing opportunities, the Visitor Complex will host an Astronaut Autograph and Memorabilia Show benefitting the Astronaut Scholarship Foundation. Throughout the day, a “who’s who” of space exploration – more than 50 astronauts and special guests – will sign autographs at the Kurt H. Debus Conference Facility, adjacent to the Rocket Garden. Each astronaut will have his/her own station and charge a fee for autographs. Guests can bring memorabilia to be signed, or choose from photos and memorabilia that will be available for purchase. Admission is $15 for adults and children.

For more information about “Atlantis – Celebrate the Journey,” visit www.KennedySpaceCenter.com. Tickets are available by calling 877-313-2610 or at Kennedy Space Center Visitor Complex.