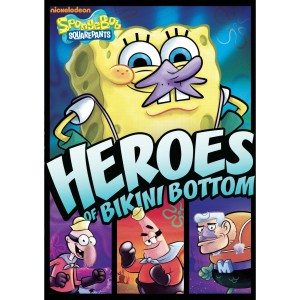 My children are not the only one in the house that like SpongeBob Square Pants. I just love SpongeBob he makes me smile and laugh. His goofiness and innocence is just cute. It one of the modern cartoons that I don’t mind letting the kids watch.

Buddy and his sister spent a quite afternoon together enjoying the DVD. Trust me we don’t have too many of those around here.  They laid together and laughed and watched all the episodes before Honey nodded off to sleep and Buddy quietly slipped out of the room to let her rest.

SpongeBob swings into superhero mode with an all-new eight-episode DVD: SpongeBob SquarePants: Heroes of Bikini Bottom, including the special episode, “Back to the Past,” guest starring Ernest Borgnine, Tim Conway and Batman’s Adam West and Burt Ward.  A great addition to any SpongeBob collection, this DVD features animated shorts and a bonus episode of the hit Nickelodeon animated comedy series, T.U.F.F. Puppy.

For more than a decade, the porous brainchild of creator Stephen Hillenburg has grown from a single Saturday morning kids’ show to a certified pop culture maverick.  Since its launch in July 1999, SpongeBob SquarePants has emerged as a pop culture phenomenon.  The series has been the number-one animated program with kids 2-11 for more than 10 consecutive years on Nickelodeon, and over the past several years, it has averaged more than 100 million total viewers every quarter across all Nickelodeon networks.  Syndicated in 171 markets in 36 languages, it’s the most widely distributed property in MTV Networks’ history.  SpongeBob SquarePants has a huge online following as well, currently with more than 19 million fans on Facebook.

“Back to the Past”
SpongeBob and Patrick travel back in time to see the young Mermaid Man and Barnacle Boy.

“A Pal for Gary”
SpongeBob brings Gary a pet that terrorizes him.

“Yours, Mine and Mine”
SpongeBob and Patrick buy a toy and have to learn how to share.

“A Day Without Tears”
Squidward bets SpongeBob that he cannot go a day without crying.

“Summer Job”
Mrs. Puff has to work at the Krusty Krab during her summer break.

Price: At $12.99 at Amazon Heroes of Bikini Bottom

we believe this price is acceptable but not excellent.  We feel $9.99 would be a better price for an assortment of previously aired episodes.

Appropriate Ages: Shibley Smiles feels SpongeBob is a cartoon appropriate for all ages. We recommend ages 4-12.

Quality: We rate the quality of the DVD as average. We would much prefer to see a new never aired movie or cluster of episodes.

Recommendation: We would recommend the DVD if you like to collect DVD’s and your child is at the age to watch the same DVD more then one time.

Additional Information: Our recommendation would be to see a brand new SpongeBob Square Pants movie.