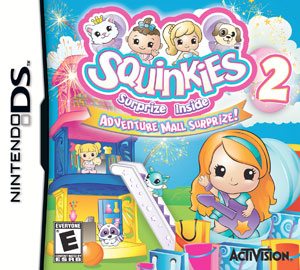 If you have a little girl and haven’t heard of Squinkies I can only assume you are unplugged most of the day. Squinkies came out last holiday season and they were BIG, or at least in the Shibley household they were. I won a HUGE Squinkie package from Blommi last year and gave it to Honey for her birthday and she has been a Squinkie fan ever since.

Gameplay features 4 distinct areas with sixteen stages in total: the Aquarium, Food Court, Wedding Castle and Amusement Park. Squinkies are on the loose within each area and players must track them down to invite them to the party! Meeting new friends will unlock playable characters in later areas and magical coins scattered randomly about the levels are used in the Gumball Playhouse to earn ten “rare” playable Squinkies characters. In addition to playable characters, there are more than 600 Squinkies™ pals to be found and collected throughout the game! With simple controls, exciting game play and adorable familiar faces, Squinkies 2: Adventure Mall Surprize! will be an instant favorite.

Honey loves to race around the mall and other worlds to collect the coins while encountering other Squinkies and inviting them to the big Party! The great thing is the game speaks to you while you play. This is a great feature if your child doesn’t quite know how to read yet. The setup up is 4 levels with each contain 4 sub-levels for a total of 16 different Squinkie loving fun! Your child will love collecting the more then 600 different Squinkies including collecting special coins to grab the rare Squinkies.

This price is what we consider the higher end for a game such as this and we would rate this as average. Maybe look for a good sale.

Age Recommendation: The age range for this game varies from 4-13 in our eyes. Squinkies is a big hit and we feel that any child that enjoys the product line will enjoy this game. With the “speaking” involved it may be easier for younger children as well.

« Sometimes Punishment is a Good Thing
How Do You Photograph a Christmas Tree? »