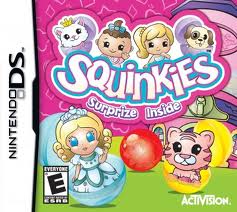 Squinkies took the toy world by storm. I know that was all my daughter could talk about leading up to Christmas last year.  I find them actually quite cute I just wish that Honey would house them in their little bubble because I’m finding bubbles everywhere. I was lucky enough to have won a Grand Prize Squinkie giveaway, and my daughter has a very nice collection.  When I heard that a Squinkies Nintendo DS game was being released I just knew it was something Honey would love to review.  She loved the fact that when she received her copy to review it came with a few extra Squinkies.  Honey was super excited and asked daily when her game was going to arrive, holding her breathe as I opened each package hoping it was her Squinkie game.

When the day finally came she broke the game in for hours.  It is now one of her favorite Nintendo DS games in her collection. I don’t blame her they are adorable!

Players immerse themselves in the Squinkies world playing as Squinkies Princess in search of their lost lovable Squinkies friends. Successfully completing a mini-game will free Squinkies which will then be added to the player’s collection. The games are easy to engage and fun to play including: Squinkies Match, Squinkies Puzzle, Squinkies Pool, Squinkies Chains, Squinkies Paint or Squinkies Chomp.

With over 250 Squinkies to find and collect, the game is packed with hours of engaging game play. Magic coins can also be earned as bonuses to collect more Squinkies. Just like the toy play sets, players can insert the magic coins into an interactive Gumball Playhouse to add new Squinkies to their collection. All collected Squinkies will be cataloged in their interactive Bubble Bank, complete with animations, music and sound effects. 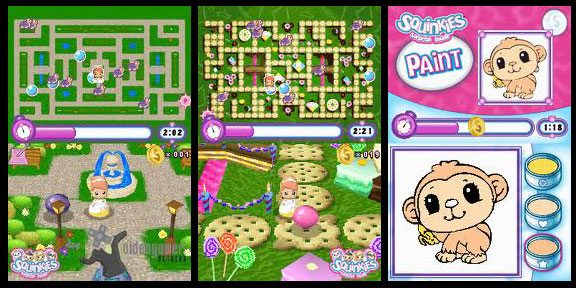 I’ve tried to ask Honey to narrow down her favorite parts of the game, however that is like asking a kid in a candy store to pick their favorite.  She has always loved the coloring pages and Squinkies does not disappoint with the cute little characters.  She loves the little games you play to earn your coins and gets excited when she gets to put it into the gum machine for a new Squinkie.

I couldn’t find anything wrong with this game. It appears to be entertaining and a perfect mix of games to hold my daughters attention. Squinkies has done a great job at capturing the fun of collecting Squinkies in a virtual world.  Both Honey and I highly recommend this game for the little girl in your life and feel it would make an excellent gift.

Squinkies Nintendo DS can be found at many major retailers such as GameStop, Wal-Mart, Target, and Amazon among others.

Right now at Amazon you get purchase Squinkies Nintendo DS for $29.96 and get FREE shipping.