Home » Blog » A Team Full of Heart
As an Amazon Associate I earn from qualifying purchases.

So I’ve mentioned in a few recent posts about my son’s baseball team the Thunder making it to the championship game. Last night was that game. Unfortunately I’m reporting today that they did not win, but it was definitely not because they didn’t try. I’ve never seen two baseball teams fight with such heart to win a game. As a mom in the fans I can’t tell you how many times my heart sword, broke, and just stopped. The tears that threaten to be released at any minute and the pride that swelled unbelievably for such a brave group of 10-12 year old boys.

The game was so close it actually went into an extra inning. At one point we were actually up 8-4 that was when I was able to breathe a little. The pitching in the game was phenomenal and for anyone that has watched this age group pitch that is saying a lot. It is not rare to see a lot of batters walked but not last night. We had one AWESOME  hit by a player (who’s father was a major league baseball player for the Colorado Rockies-so cool had to throw that in) that is one of the causes of my soar through today and what gave us that lead of 8-4.

Nick did not hit all that well and I so wish there was something I could do to help him. He did however make the best first baseman. It is rare that a ball gets passed him now matter how good or bad the ball is throw. My son has such heart when he is out there it makes me tear up with pride. At one point a play that was for sure going to give them a base the Thunder managed to turn into an our. As the player catching the ball flipped and threw it to Nick he somehow ended up on the ground, with some part of his body on the bag and ball in hand.

The game went into an extra inning at a score of 8-8. When they go into extra innings they put a runner on second and start you off with one out. Unfortunately for us we towards the bottom of the batting order and were not able to bring in a run. The other team, by our mistake did. On a wild pitch our catcher jumped up to get the ball and tripped and fell before he was able to get it and try to throw the guy out at home. I felt so bad for him, but thankfully he was the same player who had that AWESOME hit earlier so hopefully that is what he will take with him.

The boys were disappointed, and I just wanted to hug each and everyone of them. They fought to the very end with such heart I am so proud to be a part of such a great team, and honored that my son was part of it all. With all the nerves and stress I felt I can only imagine how tough it was for the boys. Great job Thunder!!

Without naming names, as they are not my children. I wanted to give a shout out to number #6 our AWESOME pitcher who even after getting hurt refused to give up, to #4 a phenomenal batter, catcher, and even sometimes pitcher, to #2 who is also a phenomenal catcher and just has such a good knowledge of the game, and of course #7 Nick my AWESOME first baseman that makes me so proud each and every day.

So here is the best I could get of Nick with his trophies. They receive one for participation and one for 2nd place. Not the usual beaming smile but really can you blame him? 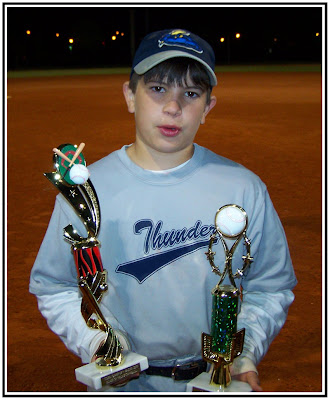 Everyone was out to root on the team, Grandma, Dad, and brother and sister. I couldn’t help but snap a shot of my other two while at the game. It is not often you will actual see photos of them in coats and/or hats. So here is some photos of my winter wearing, styling, babies! 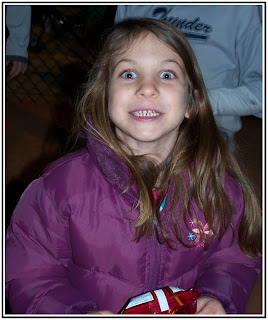 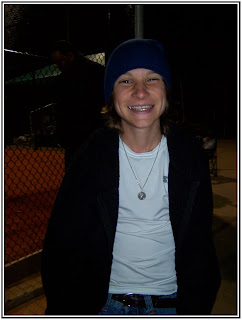