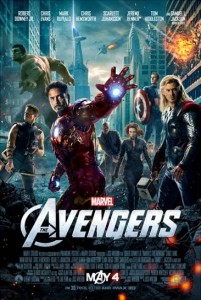 I was so excited to get a special invite to fly to New York to a red carpet premiere of The Avengers. Excited, honored, and sad that is. Sad because yes folks I had to turn it down. Why would I turn down such an opportunity you might ask? The answer is for love. My husband and I have a few places that we can’t wait to visit together, places we have never been and one of those places is New York City. So it was a no brainer when I was asked to go. I politely declined and now that when I set foot in New York City one day it will be beside my beloved husband.

However that isn’t going to stop me from giving you the chance to win a fun prize pack in anticipation of this star studded cast:

Marvel Studios presents “Marvel’s The Avengers”—the Super Hero team up of a lifetime, featuring iconic Marvel Super Heroes Iron Man, The Incredible Hulk, Thor, Captain America, Hawkeye and Black Widow. When an unexpected enemy emerges that threatens global safety and security, Nick Fury, Director of the international peacekeeping agency known as S.H.I.E.L.D., finds himself in need of a team to pull the world back from the brink of disaster. Spanning the globe, a daring recruitment effort begins.

Starring Robert Downey Jr., Chris Evans, Mark Ruffalo, Chris Hemsworth, Scarlett Johansson, Jeremy Renner and Samuel L. Jackson, and directed by Joss Whedon, “Marvel’s The Avengers” is based on the ever-popular Marvel comic book series “The Avengers,” first published in 1963 and a comics institution ever since. Prepare yourself for an exciting event movie, packed with action and spectacular special effects, when “Marvel’s The Avengers” assemble on May 4th!

– MARVEL’S THE AVENGERS set of 6 buttons

– MARVEL’S THE AVENGERS one pair of limited edition 3D glasses

Disclaimer: This giveaway is sponsored by the company or representing PR agency. Opinions are my own and NOT influenced by monetary compensation. You may read more of my disclosure here.

« Disappearing Disney Classics 5-Pack Giveaway : (Ends 4/30)
Check Out My Nephew On the News Supporting His Panthers »