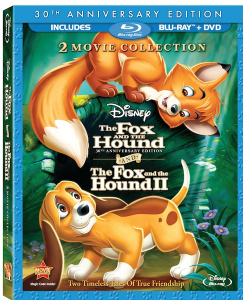 In the tradition ofheart-warming films, such as Bambi and Dumbo, comes Disney’s classic tales that taught us the power of friendship in The Fox and the Hound and The Fox and the Hound 2, in a special 30th Anniversary 2-Movie Collection. For the first time ever in high-definition, consumers can now experience the brilliant, humor-filled adventures of best friends Copper and Tod in an all-new digitally restored version of the original 1981 film

The Fox and the Hound 30th Anniversary Synopsis

When Tod, an orphaned fox cub meets Copper, a coonhound puppy, they make a pledge to be lifelong friends, not realizing that Copper is being groomed to hunt wild animals, including foxes.  Copper spends the winter with his owner, Slade, and an older dog, Chief, tracking animals at a remote cabin. When they return, a lonely Tod eagerly greets his old playmate but is stunned when a reluctant Copper joins Slade and Chief to chase Tod through the forest.  During the pursuit, Tod escapes but Chief is seriously injured.  Seeking revenge, Copper hunts down Tod only to find himself confronting an even bigger enemy, which he and Tod must face together.

The Fox and the Hound 2 Synopsis

In The Fox and the Hound 2, music takes centerstage as Tod contemplates joining up with “The Singin’ Strays,” a group of harmonizing dogs appearing at the local county fair but dreaming of hitting the big time at the Grand OleOpry. While Tod does his best to fit in with his new friends, Copper finds himself relegated to “roadie,” a position he begins to resent. With the encouragement of Dixie, the “diva” of “The Singin” Strays,” Copper manages to sabotage an important audition. The next day, their differences forgotten, Copper and Tod team up and, using Copper’s superior tracking skills, they locate the Grand Ole Opry talent scout who signs “The Singin’ Strays” (minus Tod, who chooses his friendship with Copper over fame) on the spot.

Believe it or not one thing we do not have a large collection of her in the Shibley household is Disney movies. I’m not exactly sure why because for the most part Disney movies are well written, animated, and great family movies. The Fox and the Hound is one Disney movie that I do not remember as a child. My oldest son however informed me that it is a GREAT movie. He went on to explain the plot to me but honestly I’m not sure how to reword it for this review. My son manages to tell me small details versus the actual “plot” of the movie. However what I got out of his review was in the end you had a fox and a dog that became really good pals.

The boys and Honey enjoyed The Fox and the Hound II. However my oldest son said he prefers the first one. Honey loved the animals and sat through the whole movie with her brothers. They cuddled up together in Nick’s big queen bed and watch the movie with little interruption.

Price: The price of $17.99 is above average price and a better deal then we would expect to see on a set of Disney movies.

Recommendation: We recommend the DVD for any Disney fans.

Age Recommendation: Our age recommendation is really any age. I don’t think you can be two young for the heart warming story. However if we had to give it an actual age we would say between 4-13 years old.