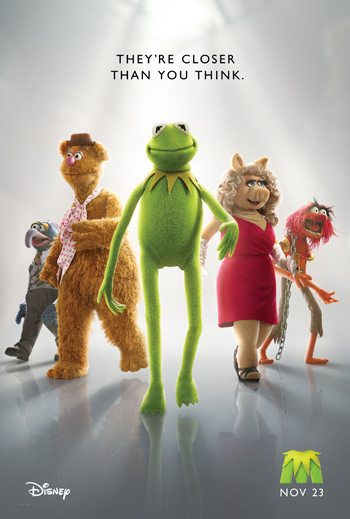 Tomorrow is the big day, the days Muppets fan have been waiting for, tomorrow The Muppets will be released in theaters. My family and I had a chance to go to a pre-screening of The Muppets this past Saturday. This was a movie that both my husband and my daughter were excited about seeing.

On vacation in Los Angeles, Walter, the world’s biggest Muppet fan, and his friends Gary (Jason Segel) and Mary (Amy Adams) from Smalltown, USA, discover the nefarious plan of oilman Tex Richman (Chris Cooper) to raze the Muppet Theater and drill for the oil recently discovered beneath the Muppets’ former stomping grounds. To stage The Greatest Muppet Telethon Ever and raise the $10 million needed to save the theater, Walter, Mary and Gary help Kermit reunite the Muppets, who have all gone their separate ways: Fozzie now performs with a Reno casino tribute band called the Moopets, Miss Piggy is a plus-size fashion editor at Vogue Paris, Animal is in a Santa Barbara clinic for anger management, and Gonzo is a high-powered plumbing magnate

I had already seen a few clicks form my trip to LA that looked pretty funny so I was very excited to see if the rest of the movie lived up to the bits and pieces I had already seen. At first I have to say I was a little disappointed. I felt the musical scenes by Gary and Mary were a little cheesy. I’m pretty sure they were suppose to come off that way, there purpose was comedy. It took me a little bit to get past these scenes. The beginning of the movie seemed a little slow but that very well could have been because I had already seen a large clip of the beginning.

I really got into the movie when it got closer to The Muppets live show. I think the show will bring back a lot of childhood memories for those that are going because they loved The Muppets as a child. I asked my husband what he thought of the movie and he said it was good. Good for my husband means he liked it, usually things are alright. I did catch him laughing quite a bit.

The boys said it was ok, it was not really something they enjoy. Honey enjoyed the movie but not as much as I thought she would. She loved Miss Piggy and definitely laughed and some funny parts. She seemed to enjoy it more like I did when The Muppets took the stage and began their show. I think that this movie will appeal to those that are familiar with The Muppets and looking for a little bit of childhood TV.

I really enjoyed the message of the movie. Kermit always has positive things to say. Sticking together and getting through the good times and bad. Another important message through out the movie was “to try” to not give up. If you want something go after it and give it your all. Over all the movie was cute and can be seen by the entire family. The rating is a G due to mild rude humor. I really was surprised my husband and I both thought it would have been rated G.

Disclaimer: My family and I received tickets to the pre-screening of The Muppets. Opinions are my own and NOT influenced by monetary compensation. You may read more of my disclosure here.

Our recommended age for this movie is six or seven and older. This is not due to any content other then the reaction from my own daughter. She was mildly interested in it. I think if there was more singing and dancing and such she would have enjoyed it better. We do feel that if your child is younger then this age and a Muppet fan or able to sit through movies and enjoy those that are a little more geared towards adults they too would be ok to see this movie.