Home » Blog » The Perfect Girlfriend
As an Amazon Associate I earn from qualifying purchases.

That is what my husband said we are creating with Honey. Of course I had already said that some time ago. What we mean by that of course is her rough and tough boy side as well as her growing like of “football”. When my daughter finally came into her own personality and flair she use to wear nothing but cotton shorts and t-shirts. She loved to play in the dirt and got excited about lizards and bugs.

As she began to get a little older we found that she loved to have her nails polished, play house, and strut around the house in my high heel shoes. I’ve always been so proud of how well rounded she has been. A girly girly at times yet ready to wrestle and get dirty with the boys. I knew with two older brothers and her dads influence she would end up being this way. Which of course makes her “the perfect girlfriend”.  She will be able to dress up and paint the town or throw on a jersey and talk the talk when it comes to sports. 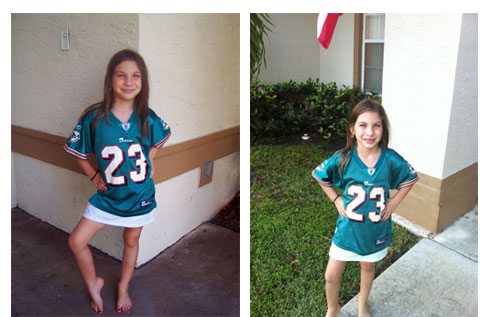 This was an early birthday present we got for Honey this weekend. I don’t normally like to do early presents but she has be begging for a Dolphins jersey. On half days at school they are allowed to wear jerseys and she will tell  you her favorite team is the Dolphins. Doesn’t matter how good they are they’re her favorite, despite her daddy’s dislike.

Each weekend my husband and the boys would place their “picks” for which teams were going to win that weekend. No betting or pools just friendly competition between the boys on who could pick the most winners in advance. Well last weekend Honey INSISTED daddy add a column for her so she could make her own picks. So he did as he was told and he sat with her naming the teams and letting her chose. That day she was constantly running out into the living room asking who was winning.

What I thought was going to be a fleeting thing turned out not to be. Friday she asked her dad when the “football paper” came. By this she meant the paper that showed all the games and teams and what they used to go through their list. Daddy told her Sunday. Sunday morning my husband was eating breakfast while I was relaxing in bed. I love to stay in bed just a little longer then everyone else so I can get a few minutes of no one needing me before I wake up. When my husband came in the room Honey all of a sudden realized it was Sunday. She jumped out of bed and said “Daddy, today is the football paper!” and ran out of the room so she could go get the Sunday paper and begin her picks.

So despite the fact that my husband intends on Honey living with us until we are gray and old and she is not allowed to date until she is 30 (yeah right!). He is taking part in making my daughter “the perfect girlfriend” to some lucky boy one day.

« Trunki from Melissa & Doug : Brookstone Review
Morning Humor : To Wake or Not? »