Home » Reviews » Twister Mania for Kinect Review
As an Amazon Associate I earn from qualifying purchases. 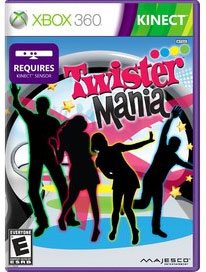 A Kinect for Christmas means loads of fun for the family. For the majority of the Kinect games it is Honey and I that is doing the reviewing. Yesterday my husband was thoughtful enough to hand over the television for an hour so Honey and I could enjoy some game playing. We decided to test out one of our new games and broke open Twister Mania. 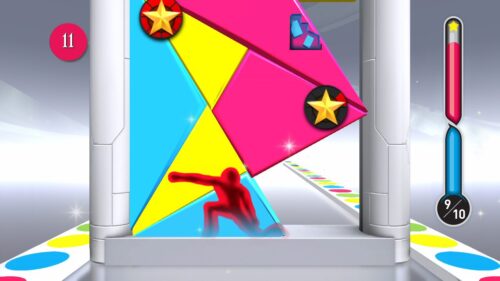 Twister™ Mania on Kinect™ for Xbox 360® combines the colorful, expressive and cooperative gameplay of the original Twister® board game and updates it for the digital generation. Twist into fun with friends and family in this light-hearted, fast-paced game that supports up to eight players with deep gameplay across three game modes with 16 variations and over 1800 shapes to play!  This outrageous party game provides over-the-top hilarity – so don’t hold back as you duck, squeeze, contort and move your body to match your opponent’s silhouette, knock down blocks against the clock and fill in thousands of crazy shapes of all sizes and themes!

So challenges were enjoyable and others frustrating. Our first problem we encountered was the Kinect could not seem to calibrate correctly, maybe this was user error I’m not sure. All the games had Honey and I at about waist high, or legs were no where to be found. Despite this drawback we began our game play. We were met with a Twister board game and a spinner.

You spin to serve up a challenge and take turns trying to get the highest score. Our first challenge was a complete bust. This may have to do with the calibration. You were to strike a pose and have the next player try to match the pose exactly. This was hard not only because of the calibration but Honey and I are total different sizes. One thing I’ve noticed with the Kinect is it doesn’t seem to calibrate per user on some games. This challenge frustrated Honey tremendously and she was ready to put in another game but I convinced her to try a few more before we gave up.

The next challenge was a little more fun. You had to contort your body to break through bricks trying to clear the board as quick as possible. The key is to completing it quickly was finding the bricks with the bombs. If you were lucky enough to get one it would set off a chain reaction crumbling additional blocks. You also got additional points if you crumbled a block that had a star. However you have to be quick because the stars disappear.

Another challenge that was interesting was somewhat of the same concept above however you had to position your body just right to move through the opening and NOT touch any mother blocks. Some of the openings were easy others not so much. At the same time you want to try to grab the star for higher points.

We had the chance to dodge in and out trying to make sure we weren’t hit by any moving objects, and of course grab those stars at the same time.

You continue spinning and challenging each other until someone fills up their twister board and becomes the winner. Our thoughts of the game was so-so. The calibration issue definitely made for a less then spectacular game play. The graphics are average not nearly what you would find on many Xbox games. I can see that this game might be fun with more people, with the two of us it just wasn’t as exciting as we had expected.

Price: The price of Twister Mania at Amazon.com is currently $29.49, for our enjoyment we find this price to be a little higher then we would pay. If you are interested in giving this game a try we would recommend waiting for a sale.

Age Recommendation: We feel this game could be played by both young and old. The concept is pretty easy when it comes to dodge and busting blocks, we would say age 4-however young you feel!