Home » Reviews » VTech Connect to Cell Review
As an Amazon Associate I earn from qualifying purchases.

When I was asked to review the VTech Connect to Cell DS6421-3 system I couldn’t have been happier. A couple years ago I started to do research to find a device such as this one. However even with the research I decided not to purchase anything. I was afraid that what I purchased would not be what I wanted. Let me explain why the Connect to Cell DS6421-3 is perfect for a family like ours.

We are one of the many families that do not have a land line in our home. Both my husband, our two boys, and myself have cell phones. Honey is only six and doesn’t need one quite yet. There are times when I will call one of the boys from work or while I am running errands and they do not answer. This always drives me crazy. Nine times out of ten the reason they do not answer the phone is they don’t hear it because it was in a different room or it was still on vibrate (a must have in school). 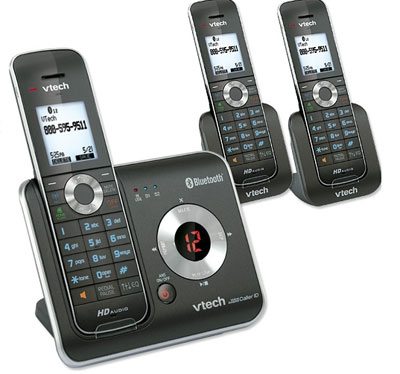 My biggest issue with the Connect to Cell DS6421-3 is that it only allows you to have two cell phones active at one time. You can pair up 4 phones however only two at a time can receive and send calls. This is great if I only wanted to pair up the boys’ phones. The Connect to Cell DS6421-3 also comes in handy paired to my own phone. I can’t tell you how many calls I’ve missed because my phone is turned down, or in my purse and I can not hear it. I would really love to be able to pair up all four of our phones at one time.

A nice feature in the ring is you can set different ring tones for each cell phone so you know which cell phone is receiving the call. The main unit rings the same for each phone with the customizable ring tone ringing just under the main ring. However the additional handsets ring with the customized ring tone. For our purposes the Connect to Cell DS6421-3 works great!

Here are some interesting results in a recent survey by VTech:

For people over 55, the gift of a phone call was especially desired with nearly 60 percent citing it as their number one choice over other forms of holiday communication. The majority of respondents also ranked a phone call as the top choice, when considering the best way to stay connected with friends and family during the busiest time of the year. Additionally, calling family and friends more often was at the top of their wish list of things to do during the holiday season (28 percent)

Disclaimer: “I wrote this review while participating in a campaign by Mom Central Consulting on behalf of VTech and received a product sample to facilitate my review.” Opinions are my own and NOT influenced by monetary compensation. You may read more of my disclosure here.