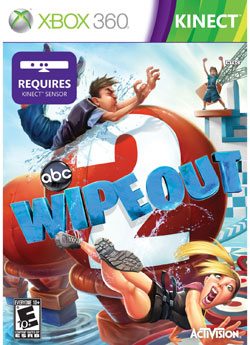 This is probably going to surprise you but I’ve never sat down and watched an episode of Wipeout. I’ve caught glimpses of it and seen commercials. I know what the game is about I’ve just never watched it. Now my husband and the boys….I can hear them laughing from the other side of the house. This is why when I was asked to review Wipeout 2 for the Kinect I thought it would be a great game for my husband and kids.

Wipeout 2 will offer updated, outrageous course designs across all platforms with obstacles and effects taken straight from the show’s summer and winter seasons. Players must navigate around snow, ice, foam, and fan-favorite obstacles like the Sucker Punch Wall and Big Balls; which are making their triumphant returns alongside more than 50 others. Extended gameplay on all systems encourages even more interaction and participation with family and friends. Once again, all the wild and crazy action is narrated by the show’s hosts John Anderson and John Henson.

Particular attention is being paid to making every platform experience unique with ramped up excitement that engages gamers like never before. Freshly revised controls makes for intuitive and easy to use motion-based gameplay for Wii owners. The PlayStation Move and Kinect for Xbox 360 titles will offer gamers the ability to taunt and toss paintballs and snowballs at family and friends while they run the course. Handheld gaming will finally become a communal experience with pass and play ‘Hot Seat’ participation for up to 4 players with Nintendo 3DS players also seeing their graphics taken to a whole new dimension. No matter how players choose to enjoy, the crazy and hilarious fun is taken to wild new heights with Wipeout 2!

Last weekend during out family XBox time we decided to give this game a try. That would be my husband, Honey, and myself. Buddy said he had played it and it was a little hard but fun. We decided to let Dad go first, this was an unusual move for Honey who ALWAYS has to be first. I think she wanted to see how he played, especially since her brother said it was hard.

We decided not to play the two player mode but to just take turns getting through the obstacles. From someone that has never seen the show it was quite funny watching my husband get knocked over, slammed into the water, and sucker punched on TV. It definitely is a lot of exercise. Sadly that is about all the positive things I can say about this game. 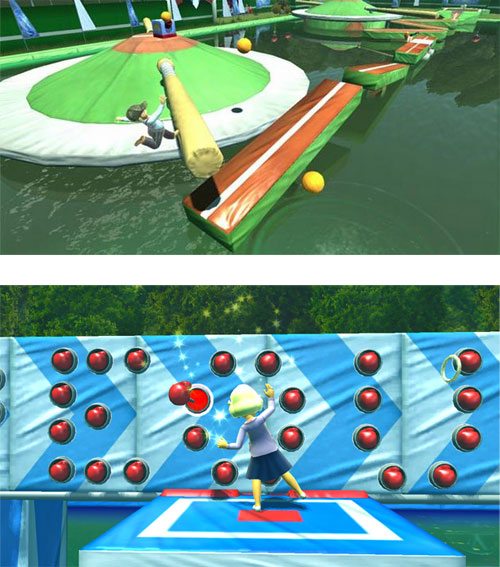 Honey took her turn and I knew this was not going to be her kind of game. Watching her daddy fall off was fun, but doing the same just angered her. She gave up pretty quickly. I myself of course took my own turn. It is hard to review a game without even playing it. Truthfully I was very frustrated by the time I was done. One of the things that was driving me crazy is there is an obstacle that you have to run and jump and grab the rope. It is, of course, all about the timing. However I would fall off and when it dropped me back into the game I would start off running. I never got the chance to time my run and jump. After a few times I threw up my hands and skipped the obstacle.

In fact I think I pretty much skipped every obstacle. It wasn’t because the Kinect wasn’t reading my actions I think it was doing a decent job. However I wasn’t really sure how to do some of the actions required. An example would be the 3 or 4 huge red balls. I would bounce on one and get to the second and bounce straight up. I could never figure out what motion would jump forward instead of up.

The replays were fun at first but then just get annoying after every single fall. Already frustrated watching yourself fail again is not fun. You do have the option of passing the replay but it is annoying to have to do it each time. If there is a setting to turn these off I was not aware of it.

I ended up leaving the obstacle mid game having given up. This is unusual for me, usually my husband has less patience then I do. I just found the game to be more annoying and frustrating then it was fun. The positive, as I mentioned above, is that it does definitely give you a good workout if that is your aim. I’ve heard many people say this is a good party game. I can see it being quite funny with a bunch of people around and trying to see who can get through the obstacles the fastest.

Price: The price is currently $42.49 for Wipeout 2 Kinect at Amazon.com . Considering the lack of enjoyment I myself found in the game I find this price to be too high. I honestly would possibly say the game may be worth a try for $9.99

Age Recommendation: Because of the frustration with figuring out how to move through the game we would recommend the game for 10 and above. Younger then that and we feel they may have a hard time navigating the obstacles.