Home » Lifestyle » Entertainment » Yo Gabba Gabba Music Makes Me Move DVD
As an Amazon Associate I earn from qualifying purchases.

LET THE GABBA GANG BRING THE BEAT IN THE ALL-NEW DVD RELEASE
YO GABBA GABBA: MUSIC MAKES ME MOVE!
Are you and your child a Yo Gabba Gabba fan? My daughter would watch this each night before she went to bed. I think the bright colors and movement really grab young children’s attention. 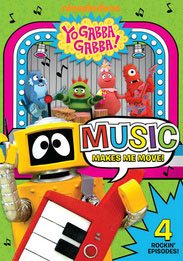 Yo Gabba Gabba: Music Makes Me Move! Episode Synopses:
Differences
The Gabba gang learns that it’s OK to be different and they point out the differences in each other.  Musical guest I’m From Barcelona perform.

Band
The characters are interested in learning to play music and decide to start a band.  They can’t play their instruments very well so DJ Lance tells them to practice.  Musical guest Lady Tigra performs.

Train
The Gabba gang learns how to overcome fears and learn about the multiple parts of a train.  Laila Ali guest stars in a “Dancey Dance” segment.

About Yo Gabba Gabba!
Yo Gabba Gabba! premiered in the U.S. on Nickelodeon in August, 2007 and currently ranks as one of the most popular series on television with broad appeal among preschoolers, parents, teens and adults.  The award-winning series is created by Christian Jacobs and Scott Schultz and is produced by The Magic Store and W!LDBRAIN Entertainment.  Jon Berrett and Michael Polis are executive producers. The live show, Yo Gabba Gabba! LIVE!: It’s Time to Dance! Presented by Kia Motors!, is produced by S2BN, in association with The Magic Store and W!LDBRAIN Entertainment.  Yo Gabba Gabba! infuses retro-style and beat-driven music to teach simple life lessons through music.  The series and the live show star DJ Lance Rock (Lance Robertson) and a cast of colorful characters, including: Brobee, the little green one, Foofa, the pink flower bubble, Muno, the red Cyclops, Toodee, the blue cat-dragon and Plex, the yellow robot. Yo Gabba Gabba! apparel, CDs, DVDs, books and other merchandise are sold in stores nationwide.  Visit www.yogabbagabba.com